Not a day after our linked system was heard coming out of a local GMRS system, this appears on the Facebook group.

Going to be a challenge to find all of their node # and start adding these things to DENY lists. 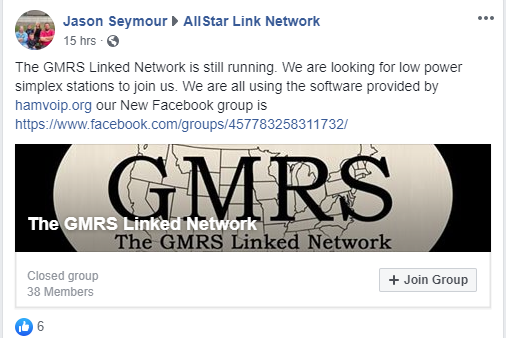 You heard your AllStar nodes coming out on GMRS? Which node on the GRMS side was doing that?

We don’t know. No one was in a position to check the map, etc. Apparently no one heard the connect telemetry and they could have come in any number of the 4-5 nodes we have connected together. If there is a connection history log > 24 hours we can get those pulled and look for activity during the rough time period.

I guess some of us will have to join their FB group and see how they exchanging node info to be able to connect to each other.

Apparently the FCC thinks it’s ok for GMRS to link and therefore use app_rpt but they are not allowed to transmit on the Allstar network. If they are using the AllStar network for GMRS traffic I want to know about it. Please keep me posted.

Joined the group. They are apparently modifying a HamVOIP build to talk to their own ‘lookup’ servers.

Will have to keep a good lookout for any folks not following that path.

I believe lookup servers are the HanVoIP DNS servers.

What we need to know is, were they connected on monitor only or on duplex? And if on monitor only is it legal for a ham radio signal to be sent on gmrs? We already know that the inverse is illegal.

If the hamvoip dns is helping gmrs repeater connecting to ham repeater, they could have gone too far this time. (not that they did not already went too far…)

Any kind of linking between GMRS and Amateur radio is expressly forbidden by the FCC and not supported or condoned by the HamVoIP project. As far as I know, GMRS users have developed and maintain their own lookup system using downloaded rpt_extnode style nodelists, not DNS.

I am curious what node numbers the GMRS traffic was coming from, so I can keep a lookout for this as well?

Unfortunately neither party who heard the situation were in a position to check the bubble map or any of the 4+ nodes that could have been used nor heard any connect/disconnect telemetry on the 1-2 repeaters they were using. Hopefully just a ‘fluke’.

Hello every one. I am the founder of The GMRS Linked Network aka WQXN966 aka KD9JON. If you have any thing to ask me feel free to ask. I have worked to damn hard for bull shit to start. The network has been running for just about two years now. And not that you know about it its a problem

just a FYI we are not the only GMRS Group doing this. I am the only one who cares to fight for my fun.

We are not able to do that. All Star Link is a network just like we are. We are using the same software App_rpt. I am not going to give a way how its done have a look. If there is a way for the Allstar and Hamvoip to work with me and block out GMRS node numbers I am all for it.
Hamvoip has it setup to help private nodes and stops me from using less then 1999 and I can use 300 I dont know it thats a Allstar number or to *3300 it dont like

Thank you ever so much for your ‘kind’ responses.

Jason, there is just coincidence between what may be local inappropriateness/mis-configuration and your unveiling of your efforts. We are ALL under scrutiny at various levels of “pure RF” vs “radio via ‘Skype’” etc.

No one needed or avoided asking you anything specifically but understanding the recent appearance of incidental GMRS traffic broadcasting one of my repeater systems/node and revelation of a new specific ‘feature’ of HamVOIP, etc.

Certainly, I hope, you can respect the concern some may have of to most of us un-announced and undocumented provisions of HamVOIP ‘features’/experiments leveraging the guise of AllStar.

As to respectful discourse… your tactful/strategic generous application of f-bombs/vulgarity amid your recent anti-ham Facebook video so noted. Not judging, but in PR/marketing terms, I don’t think that welcomes, encourages the general public to get in touch… but rather distance and avoid at all cost. Understand your early-adopters will admire you… then the rest of the general public happens…

Just curious what the undocumented ‘features’ of HamVoIP are that you’re referring to? Any version of app_rpt could be used for GMRS and even commercially. As long as a user has a valid AllStar registration string (for iax.conf), they’ll be able to connect to ANY AllStar node; unless explicitly rejected by the node (e.g.: by a whitelist / blacklist).

This brings up an even more important question of how Internet linking fits into the scheme of things with Part 97. The FCC doesn’t address Internet linked nodes at all, as far as I know??

I am not sure where but I believe it was on Community somewhere. This individual emailed the FCC and they said it was OK as long as it didn’t hit the PSTN. The FCC appeared to consider a DSL connection that only connected up to each other and not allowing phone calls OK. If I can find the post, I will update this post.

That actually is an interesting idea. I for one would enjoy playing with it. My son is a little young to get a ham license but enjoys using FRS. I could get a GMRS license so we could use that to communicate with. This would be great for use around ski resorts. — Sadly, at least from my limited research, most FRS/GMRS radios don’t support repeaters. The Motorola radio I have supports it but I haven’t found a local repeater to test it with. An allstar GMRS network would be pretty cool if it was separated and only accessible using a GMRS radio.

I would be most interested in the Boards’ s position on support of GMRS. I know there are a lot of arguments against linking of GMRS. However if one reviews the history of the rules there was a ban on linking to the PSTN and this was done to prevent competition to ATT and long distance services (when there was such a thing). While PSTN interconnection is not permitted, the rules have been relaxed in many areas. The current rules do have some vestigial scriveners errors resulting from attempts by staff to remove obsolte rules and when doing so, leaving orphaned rules behind. I questioned this with the FCC during the last rewrite (which took years) and in the end the FCC simply ran out of time. So what we do have in the new rules is suggestions that linking by the internet is indeed supported. So assuming that there is no FCC ban (to date there have been no FCC NAL actions) . Will ASL Board support GMRS systems? Obvioulsy no one is asking to link Part 95 and Part 97, rather support linking of GMRS with ASL. Why would someone need to do so? The cost of a high altitude repeater site is out of reach these days. Same for ham radio. Smaller footprint repeaters can be simulcast with RTCM or can be multicast and operated on a cooperatve basis. Perhaps the GMRS nodes could be partitioned or assigned in a way that removes any confusion.

Todd; If you know where to look you can find commercial radios that are GMRS Part 95 certified. Motorola Systems Sabers oddly enough are Part 95 (In 440-470 band). Kenwood is very GMRS freindly. A TKR-840-1 repeater is legal for GMRS. Vertex had models. High performance GMRS is not dead, you just have to work harder than buying a Midland or even a Motorola (bubble pack) radio at a retail store.