I have seen this radio for sometime now. It runs Linux. Right around 200 bucks. I wonder if we could get ASL to run on it? Any thoughts? 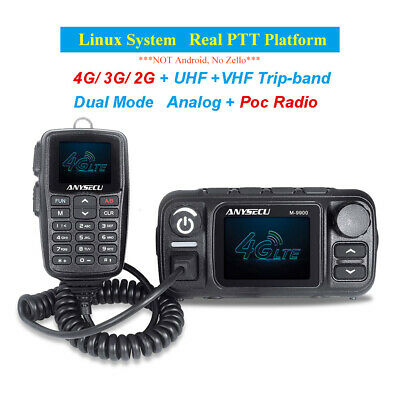 ( For internet model, only support Real PTT platform). This radio has transfer function. It can let your android radio talk to analogue radio. Special microphone. It can show the radio screen content.

usually something like has a stripped linux system running busybox, and software to provide the functionality that they need from the hardware. It will also be limited on memory. You can pick one up and try it, but most consumer electronics are going to be this way.

Yup, a lot of interesting hardware out there that uses linux as a base OS then they put their code on top of it. Saves a ton of development time in not having to write an OS for a common hardware, then you can concentrate on building your software on that foundation.

I am new . Just started today new.
I am wondering does anyone have any experience with these m9900 radios . I picked one up to use for gmrs and was hoping to somehow trick it to run the zello app.
Any help or info would be much appreciated.
Also what is the usb port for doesn’t seem to do anything.
Programming is done thru a mic cable plug.

I found this on an eBay listing for that radio…

Note: this 4g radio m-9900 is NO-Android system, so only can use Real-ptt platform, can’t use Zello.

So, my guess is no, cant run zello on it.

Neat looking animal. I always look at them.
But I found a long time ago that a DID phone connection to a VPS or home system of asl allows me to just control my node or ‘a’ node of my choosing with just simple dtmf. Not to mention home automation through gpio control using asterisk and a network gpio.
My only expenses were the DID (about a buck a month after initial sign-up) and the cell phones I have anyway, one on each carrier, att verizon a tmob. But you only need one of course. I use the cheap pre-paid accounts ranging from $15 - 25/month on phones I own.
The VPS costs me about $5 month.
Since I already had the infrastructure, I only needed the DID on the VPS server.
Why try to build asterisk into a phone when you can control it with a phone.
Having a phone port to the node is very useful. I encourage all to at least create a sip port, and try a sip phone and start dabbling.

My only thing against spending all the money playing with new hardware like that which was posted, is in a big box here at home… all $2500 worth of dated or bad ‘smarter’ products I have collected over the years. So I now look at it as… ‘what will it actually do for me that I can not already do’.
But I have to admit, playing with it is fun !. Any hacker maker would clearly understand.