I know a lot of you have some pretty far remotes that hardly see a human. This may be for you if you have not managed methods to this point. I have been using remote control through asterisk for more than a decade and at the point where I was expanding and wanted to update everything to what is more commonly available and on the cheap if allowed. I like my controls to be the same every location and have extras in case of failure. So I thought I would outline what I decided and implemented on …

But note that I will not go into any detail on modbus info. To much to cover and those that are familiar can quickly adapt on their own. This is for the beginners. See data sheet links below.

So the device is labeled R413E16 / eletechsup and is available in 2 versions. The 'A" version can be quickly mountable to the 16 relay board seen in previous write-up with a header pin arranged at the bottom. ‘B’ version is basically upside down version of the same and will not mount on relay board accurately. Likely find these on ebay, amazon and some other hacker-maker sites.

One important note that the ttl232 inputs are different than the rs485, but if you are to use ttl232 inputs, you need to remove the rs485 chip as it interferes with the data. It is the 8 pin chip. Sorry, it looks like no provision was made for this in the form of a jumper as I doubt it was designed for more than rs485.
Internally, I think they used the ttl232 to program them. 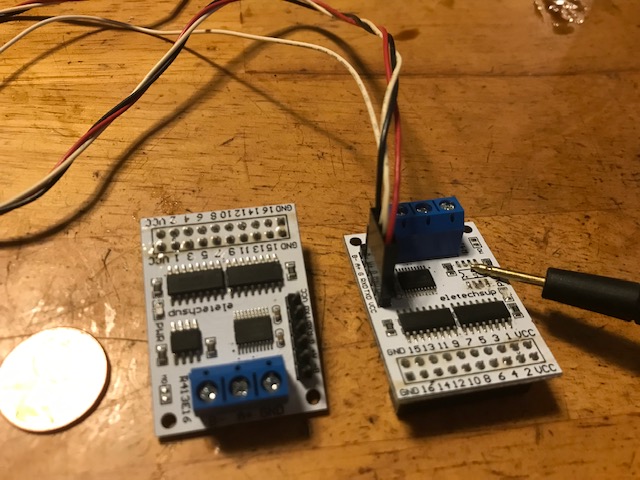 That is a penny for size compare.

Did I mention this is plug and play in the 16 device relay board.(20 pin idc header)

So, if you have ever worked with a ‘AT’ command set, you will find this simple as they come.

I wrote a shell script for this to be able to just call it from the dialplan with even more limited parameters.
Here is the contents of serial-control.sh but you will need to change the tty device to match your usage.
Comments do not format well here.
You might notice the logical 'G" used for 16. Yea, that’s right. Novice asian dev’s I would say. They are not using logical hex number set.

You could also convert the dialplan I posted for the other with methods mentioned within the network control of previous post or perhaps later I will add one here.

./path/serial-control.sh t2 - will toggle relay 2 from off to on or on to off depending on its current setting.

data on device from dev that I keep stored
https://kttycat.com/dl-files/serial-modbustool.zip

Know that there are a lot of countries and IP ranges blocked from my servers. Sorry !

Late additional I perhaps should have included…
The bash script basically converts the command line to upper case as that is what is required for device input.
And inserts the AT+ and then your command you issued (shellcript.sh T3 (toggle #3))
Then clears any reply in the serial buffer.

You don’t have to use the script if you run your command in uppercase and include the output device in the command line with speed. The shell script makes it simpler, and as I do, write other stuff into it.
Like complex combinations for sequencing and a special command for that sequence selection.

As I normally use this example,
I have a backup diesel generator. When my solar controller batteries are low, I need to sound a alarm near it for 10 seconds, then turn the ignition on, then fire the glow plugs for 10 seconds, then initiate the starter for 4 seconds while the glow plugs are still on, then turn it all off when the controller throws it’s switch to say it’s charged to a level I have set.

So you can see that complex actions can be made with a simple device that has 16 switches, and a computer for a timer / actuator.

The physical connection from the device to a ttl232 device is straight forward.
5v, ground and a swap from tx to rx and rx to tx between them. (one device tx is the others rx)